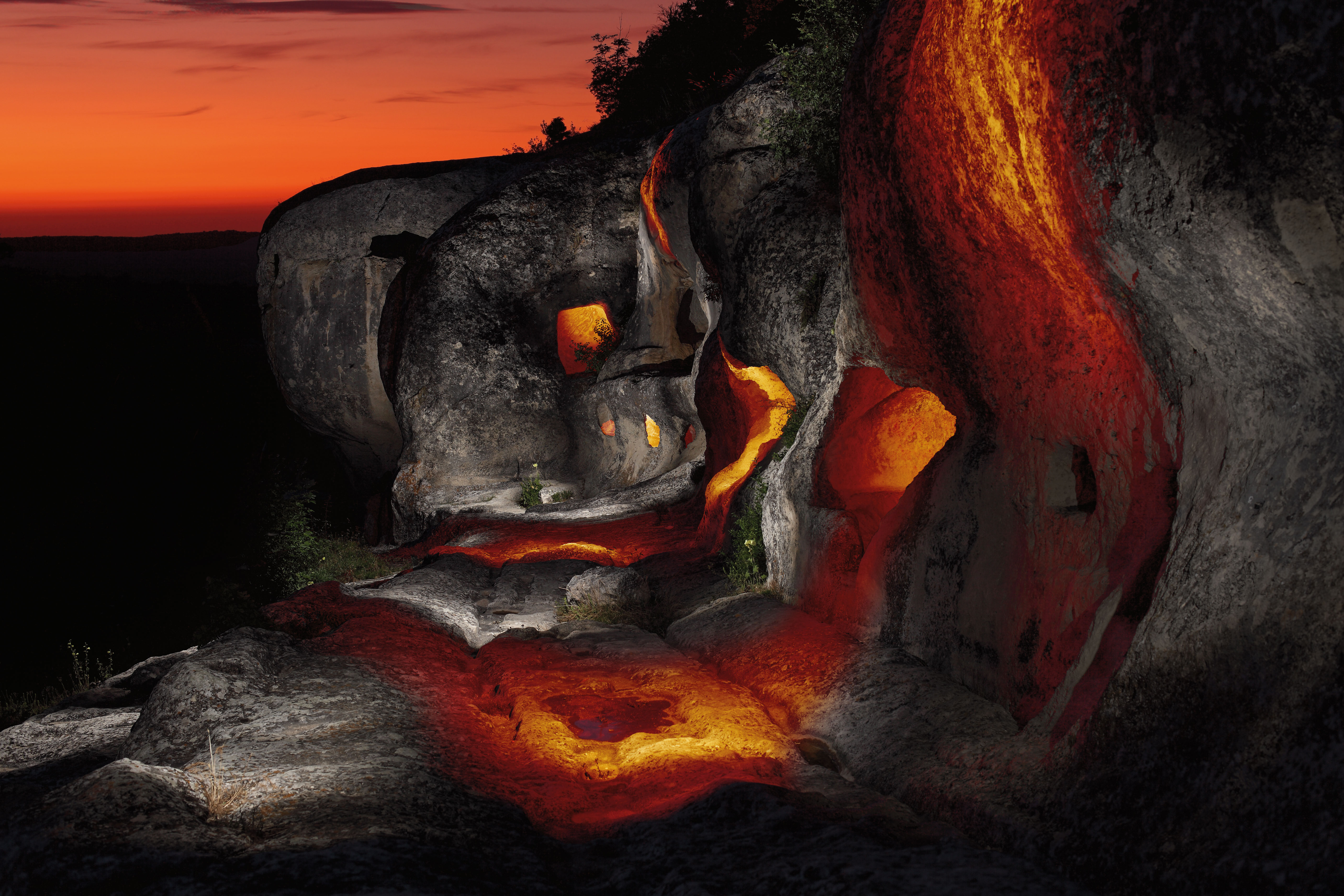 Who rendered the gated community?
In the books you will find the names of warlords.
Did oligarchs model the polygons?
And Babylon, many times demolished,
Who made it into a shooter game?
Who programmed the zombie swarm?
Where, the evening that the Mall of China was finished,
Did the 3D experts go? 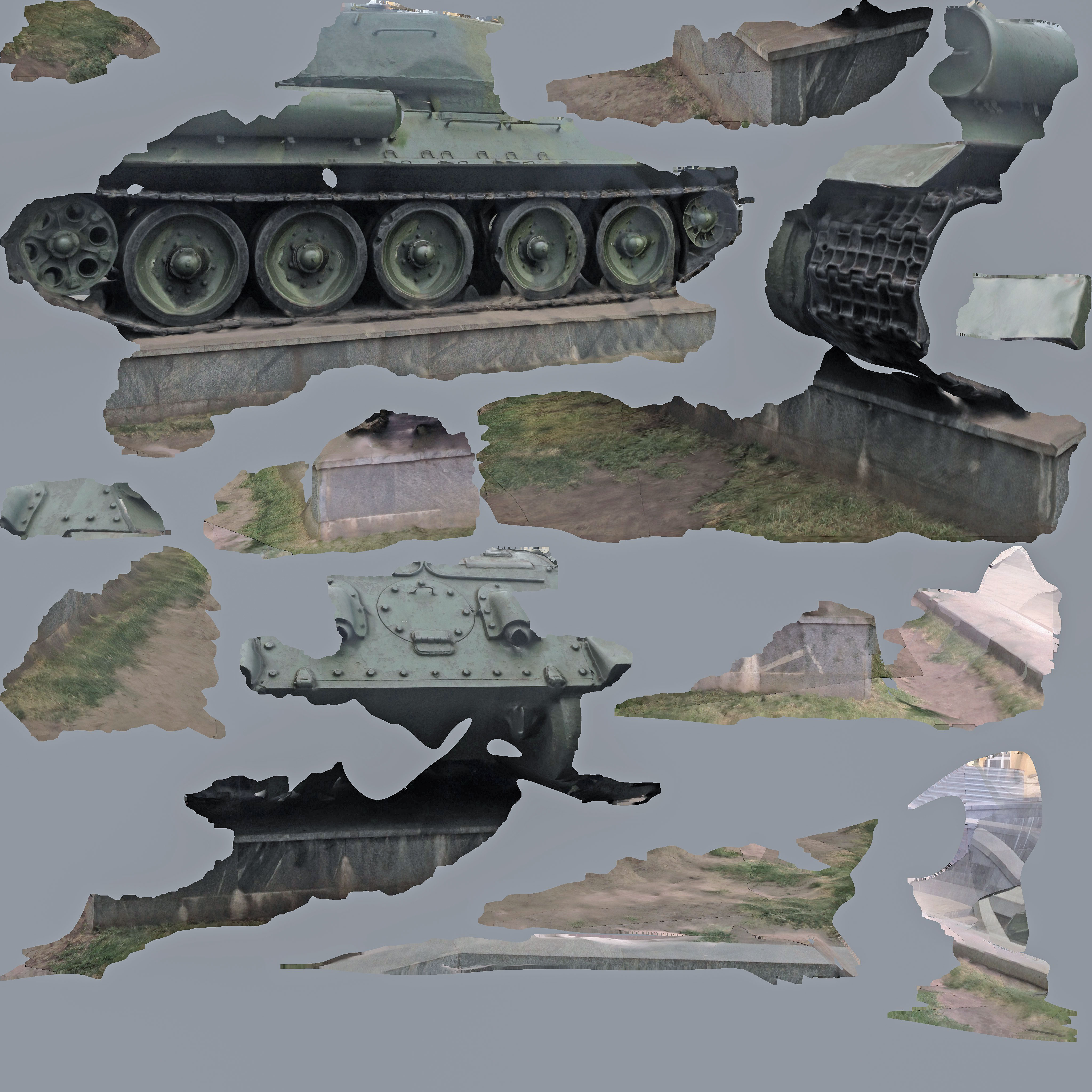 My profession is actually the engineering of aircraft control systems. After my studies, I was supposed to construct rockets, spaceships, and management systems. But the Soviet Union collapsed, its space program was shut down, and its workers went to sell stuff on the streets. I’ve tried to start my own business, and my original dream was to do hi-tech. This was no longer possible within the state program, so I had to create it myself. I did it all myself, because I did not have a father. I’m from a poor family with a single mother.

When I was registering my company in the 1990s, the environment was similar to the period during the Soviet New Economic Policy in the 1920s, which saw the emergence of the first private entrepreneurs. When we started to work with interactive applications, the core team of scientists came from the testing laboratory of the Malyshev tank plant. So you could say that we were initially utilizing the scientific potential of the Soviet Union.

After starting the company in the 1990s, we became one of the leading operations on the market. Our ambitions started to grow. At the time, in the early 2000s, the internet was still science fiction for us, to a certain extent. But then we decided to switch our medium— from paper to electronics. So we sold all our printing equipment and started to do web design. In parallel, I was developing my skills, since we hardly knew anything about the internet. In 2001, we were ten people, and from then on we doubled our staff every year. This is a very fast tempo for growth.

Most Western companies work here in Ukraine, because it’s cheaper here. The workforce is cheap. They do outsourcing, of course. As the quality of life here becomes more and more similar to the quality of life in Europe (Maidan has to do with Ukrainians’ desire to live better), the costs of labor here will rise, and our region will be less and less attractive for outsourcing.

Nearshore is more European and is very popular at the moment. You work with your nearest neighbors.

We produce hi-tech products like virtual reality systems, simulators, and augmented reality, in which our reality merges with the computer. All this is based on our understanding of how humanity will interact with the virtual world in the future.

For me, business is creativity. I don’t separate my artistic practice and my business activities. I see a lot of similarities between the two. I do this not only for money, but also for my own self-realization. An interesting fact is that I create virtual worlds in both realms: virtual 3D worlds in my day job and unreal worlds in my artistic practice.¹ The project “Another Ukraine” literally shows Ukraine in a different light from direct and oblique points of view. People in Europe have never seen Ukraine from this point of view. Many artists (especially photographers) focus on the difficult sides of life in Ukraine (revolutions, homeless people, the hard work of the miners, etc.). But artworks can show that even when Ukraine is at war, people still do creative things. 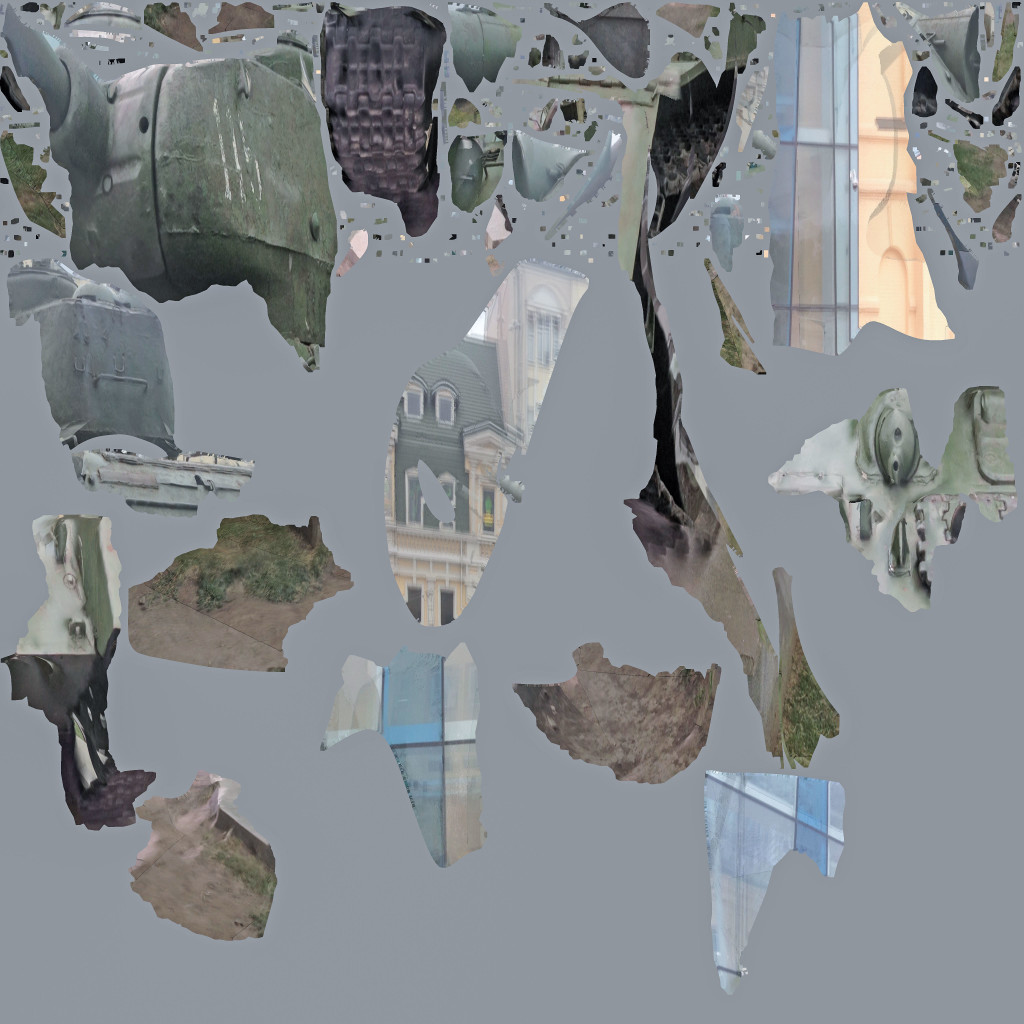 Most of our architectural projects come from Europe, in the sense of “nearshore” operations, contrary to the largely American concept of “offshore.” Nearshore is more European and is very popular at the moment. You work with your nearest neighbors. The primary advantage is a minimum time difference. When you work with India, for example, they have a totally different way of thinking and different concepts. We experienced this when trying to do outsourcing ourselves. The third important aspect of “nearshore” is its physical proximity. It’s convenient to spend just three hours on a plane to get to Kiev. Until recently, you could get to Kharkiv with Austrian Airlines, which is unfortunately not the case anymore, because of the military situation. This limits us a lot, and it’s a major blow for us in Kharkiv.

The military computer simulator is our own development. It’s a so-called stealth shooter. It means that you pass through the levels of the game not by completely killing and eliminating the enemy. Instead, in this shooter your enemy’s forces dominate, and you need to proceed with maximum invisibility and subterfuge.

We are eighty kilometers from Russian border, which is a one-hour tank ride.

The game is about American soldiers in some unspecified Third- World country. There are other soldiers with red stars in the game, but that’s just a formality. The American soldiers get ambushed and have to evacuate to their living quarters. They request a helicopter for help, which gets shot down. The game was designed in 2008 and 2009, and in terms of game mechanics, it is very original. There are different specialists among the game protagonists—one is a sniper, another a sapper, a kind of combat engineer. You can only play this game in cooperation with several other people, through a network. It’s based on team activity. It’s not located in a particular place, but we were thinking about Beirut when we were making it.

Another one of our more interesting projects, based on true events, is called Skyscraper: Stairway to Chaos. This was created shortly after September 11th, during the manhunt for Saddam Hussein, who was a national hero in Iraq at the time. There are reports that Saddam Hussein wanted to reconstruct the Tower of Babylon and use it as a symbol to unite Islamic peoples. We wanted to use this tower as a brand. In our computer game, Saddam builds this tower, which has mystical meaning—providing contact with other worlds. It functions like a portal to parallel dimensions, where all kinds of monsters emerge. Saddam discovered the historical site of the tower and started to do excavations. So of course there are zombies there.

In 2014 the Ukrainian IT market fell 30 percent—not only for development but also connection technologies, cellular phones, the internet, and so on. The market contraction was mostly due to decreased consumption. People were buying less cell phones, for instance. Also, huge transnational companies able to shift their locations closed down operations here. For instance, Luxsoft shut down a huge project here and relocated hundreds of developers to Poland. Samsung has closed its office in Kharkiv but stayed in Ukraine, moving to Kiev. The huge company Wargaming closed here as well. 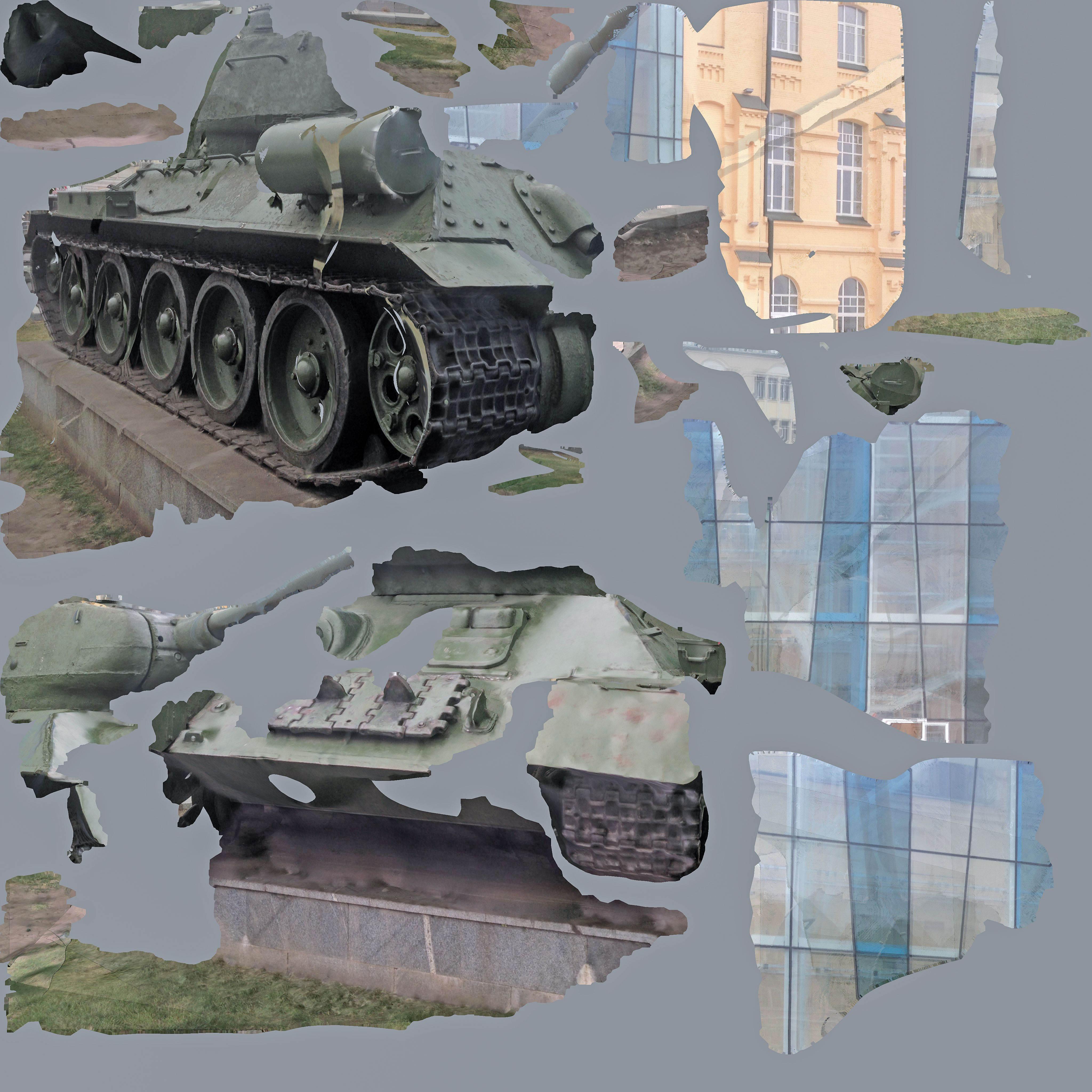 What’s also important in terms of business is that many companies here do body leasing. They rent out their workers. These people work directly for the client company. This kind of business is the safest for IT companies. You are not responsible for anything. You just rent out your workers, and the client manages them. Accordingly, the client makes certain investments in forming a team. Because of all the recent events in Ukraine, clients are wary of starting this kind of extended process here. Many long-term projects now are being cut. The short-term projects are ok, but nobody knows where Ukraine will be in a year or two.

Generally, everything is fine here, with the exception of a certain nervousness. But if shelling starts, it will be impossible to do business here anymore. Minor explosions occur in the city sometimes, but people don’t see this as an immediate threat. There is the minimal danger of being impacted by one of these explosions. But these explosions could be just preparations for more widescale actions. If the situation gets serious, we will have to somehow evacuate our business and save people, giving them the possibility to keep working. If there is a real problem and the enemy starts advancing, with the advance of the enemy, there will be a huge wave of migrants into Europe. So we have decided that if a really urgent situation develops, we will move our business abroad—and our people as well.

Everyone is afraid of the simple fact that bombs could start going off here tomorrow. And this could happen so fast that we will not be able to do anything in response. We are eighty kilometers from Russian border, which is a one-hour tank ride. This apparent calm can be disrupted at any moment. The situation is beyond human control.

For me, business is creativity. I don’t separate my artistic practice and my business activities.

OLEG FONARYOV (born 1970) is the founder and CEO of the 3D rendering company Program-Ace, based in Kharkiv, Ukraine. He is also an artist. Program-Ace mainly takes on work outsourced by Western clients who commission 3D architectural renderings, development for online casinos, or elements for games. The company’s business model could be described as “nearshore” in contrast to the more common “offshore” scheme. The text has been compiled from an interview with Oleg Fonaryov conducted as part of research for the video work The Tower by Hito Steyerl. The interview was conducted by the producer of the video, Oleksiy Radynski, in July 2015.