DISCREET—An Intelligence Agency for the People 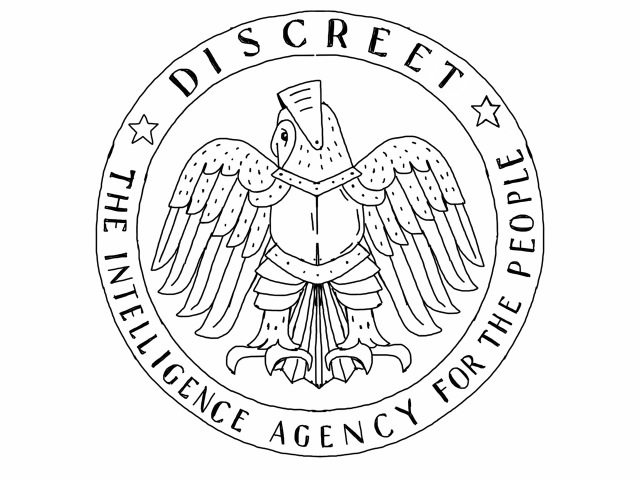 Call for Participants
The 9th Berlin Biennale for Contemporary Art invites you to apply for one of fifteen spaces open to individuals interested in taking an active part in a three-week-long public workshop for the formation and development of a civil secret service organization. Held from June 22 to July 11, 2016, the workshop brings together renegade experts from art, theory, technology, politics, law, hacktivism, and financing in order to provide (a) new agency for the twenty-first century.

Project Description
DISCREET is a new kind of intelligence agency that is currently under development. Between June 22 and July 11, 2016—during the 9th Berlin Biennale for Contemporary Art from June 4 to September 18, 2016—you will help draft DISCREET’s basic mission statement, its goals, strategies, and actions for an open-source secret service organization. We the initiators seek to respond to the massive increase of means available to entities worldwide not under democratic control. We are interested in gaining access to such hidden fields of agency and rapidly expanding money streams. We therefore propose to establish our own agenda, distancing ourselves from our competitors as representatives of an overcome arcana imperii.

As a participant you will help shape the agenda for a post-war “discreetness” (a type of knowing silence oriented towards diplomacy instead of warfare) in order to replace the hegemonic war of terror-secrecy.

Concept—An Intelligence Agency for a Post-War (on Terror) Era
Arcane policy has recently changed from an irregular but somehow legitimate politics of the sovereign (the people!) into an imperial means in itself—this shift, from protecting the constitution to surveying the people as a whole, was what caused Edward Snowden to go public. Secret services, usually operating as artifices of war, have now turned on their own societies for further growth and expansion: Have citizens become the enemies of their own agencies? If so, what type of war will we all be involved in?

By all accounts, a syndicate of dominant market players (e.g. NSA over CIA) has declared this warfare one-sidedly, creating an obvious opportunity to also produce a different intelligence. This means providing discreet information, products, and services directly to the formal sovereign—the people, which has been left unrepresented.

But how can we bring an end to this permanent state of emergency—one that has been successfully implemented and continues to work as a self-fulfilling prophecy? How can we implement an intelligence agency for the people that offers an alternative body of knowledge to the current military secrecy fueling the machine de guerre? We propose approaching the current order/era of the twenty-first century by addressing three obvious developments:

1) “From Westfalia to West-failure”—Dispersed Sovereignty in Global Power Networks Since sovereignty has shifted away from nation-states towards informal and non-democratically legitimized entities (like the Eurogroup or Troikas), DISCREET seeks projects that make use of the floating fragments of sovereignty, channeling them into a new global framework to come.

2) No/More Money: The financialization of all spheres of public and private life creates a condition of financial feudalism that leaves behind an increasing number of newly fragile states. DISCREET welcomes projects and strategies that develop economic models, institutional frameworks, and financial instruments under a derivative paradigm that provides actors within failed states to take over governments and lead their countries out of misery.

3) The Big Dicdata—Coming Data-regimes: Currently a competition is taking place between secret service agencies and transnational corporations for the control of the main resource of our time: data. New forms of data-driven and automatized governments are arising. DISCREET promotes projects to better understand this automated future, providing improbable models and algorithmic alternatives in order to disrupt this seemingly irreversible development towards increased welfare.

What Will Happen?
During the three-weeks of the workshop up to fifteen participants will work together with their colleagues from 10 am to 6 pm in one of the central venues of the 9th Berlin Biennale. Based on their own set of ideas, projects, and platforms they will develop innovative political, technological, and social or cultural concepts and strategies. Throughout the entire process they will receive the support of a number of accomplices, who will occasionally drop by as friends or will provide insight into central cultural techniques such as cryptography, surveillance, financial analysis, geo-political strategies, etc.

The public will be allowed different levels of access to internal discussions. Some discussions will be observable via surveillance media. Discussions with accomplices and other agency guests will take place publicly.

Outcome and Long-term Strategy
• The outcome and further development of the agency is open-ended and you willplay a role in shaping this at the end of the workshop.
• Some of the public conversations will be streamed live and an archive of the first workshop will be published on the Internet. A film project is also in the planning.
• A crowd-funding campaign shall finance the formation of several national/regional/thematic divisions of DISCREET.
• Agents from all over the world shall be recruited and educated.
• DISCREET will publicly demand and take legal steps towards a liberalization of secret service markets in order to participate in public calls for bids with other providers like the CIA, NSA, etc. for missions/mandates (like Alexander Kluge once did for private TV in Germany).
• Institutional experiences—of agents on their march through the ruins of what was formerly known as institutions—will be documented and discreetly displayed in future exhibitions and artistic/activist endeavors.

What Are You Provided With?
a) Generally
• Being part of (and founding) a long-term international platform as well as a unique endeavor in the field of post-contemporary art at the heart of the 9th Berlin Biennale
• Trans-disciplinary exchange with renegade artists, activists, researchers, etc.
• Basic training in essential techno-social, cultural, and political techniques of the twenty-first century (encryption, hacking, financial market analysis, etc.) by outstanding people working as accomplices of DISCREET
• Find potential matchmakers for your project from various fields
• Support in financing and organizing whatever is produced during the first workshop
b) Individually
• Help in applying for national funds for travel costs and accommodations
• A fee for the three weeks

What Do We Want from You?
• Your expertise, project—or platform—idea that fits the program
• Fulltime participation (when possible) during the entire project
• Strong motivation to join daily working conversations with other participants and accomplices
• Interest in integrating your idea/project into a wider collaborative endeavor
• Approval to be part of the artistic documentation (film, audio, blog, etc.)

Formal Requirements
• An outline of an idea/project/platform/endeavor (max. 15 pages)
• A CV and some examples of your previous work and current interests
• Send all documents electronically by May 13, 2016 to discreet@berlinbiennale.de and follow updates via twitter: @aavarmen